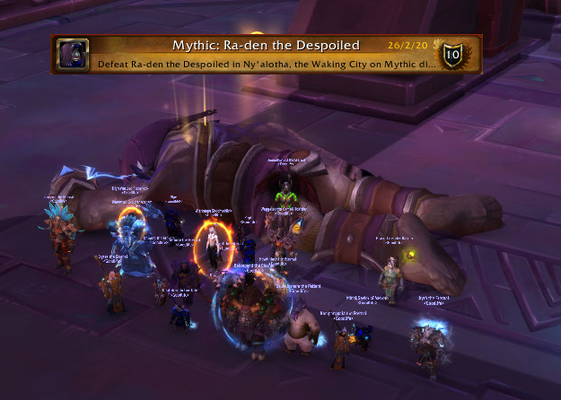 9. 9 Is the number of bosses we have slaughtered so far. 9/12 is what we are on. You might think we are almost done, but that would be way too far from the truth.

That does mean 8 bosses have died before this post, and not all in a quick succession which would give us an excuse for not making posts about them. No, it didn't go all smooth, but we pulled through and killed Ra-den quite nicely.

While our reclear last week went smoother than before, Vexiona still stood up. This week however we brought her down with one slash and moved on to an enemy of past. Ra-den had to die again and we made him die.

We played volleyball, which by the way was a lot easier than football, we passed on STD's to whoever was closest to us and furthest from us. We've killed eachother with them. But in the end we grew together. We grew past a small hiccup of mechanics and brought down Ra-den.
As Goodlife this is our first progression kill on a reclear evening.

Il'gynoth awaits. While 19 of us are not accustomed to running around in a red puddle under us once a month, we will teach ourselves how to do so.
Onwards we go, with N'zoth still lurking in the dark.
1 Like
Share