Not so Za'qul any longer 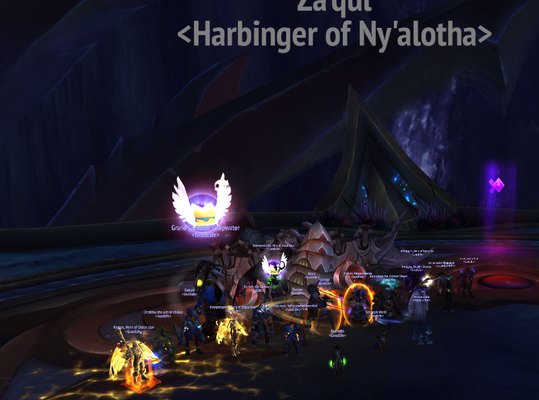 What a tier it has been, sadly without updates on this website untill today!
Our team has managed to kill Za’qul on Tuesday, and it has rocked us forward in ranks. Speaking right now is a guild that managed to jump into top 275 within 3 tiers. Coming from nowhere all of a sudden a name has been made that can be said with pride.

Getting slapped by tentacles was way too pleasant for some, getting penetrated by other tentacles was a dream coming through for a selection of our team. After complaints and suggestions we managed to get the whole team on the anti-anime side for this fight. We fought through fear, realms and delirium. Confusion was key, but we managed to shed light in the darkness and saw him drop to his knees. No longer will his tentacles be used by Queen Azshara for her own pleasure. We are coming.

On we go, to what promises to become another difficult progression. Many of us have not been in a room with a Queen. We’ve all had our go with a lady, but a Queen is a big stepup. Police might get involved, rules might be set and in the end, we know the raid leader gets his go first. Let’s polish our weapons and gear specially for her, and let’s make her wet. After all, we’re fighting in a dome under the water, how else would we manage to get a woman wet?!
4 Likes
Share